In unsurprising fashion law news, we have another act of cultural appropriation controversy stemming from Native American-inspired headdresses.

Heidi Klumm is usually the one doing the judging (as host and judge on “Project Runway.” Klumm is now facing criticiscm for approving a particular photo shoot on “Germany’s Next Top Model.” 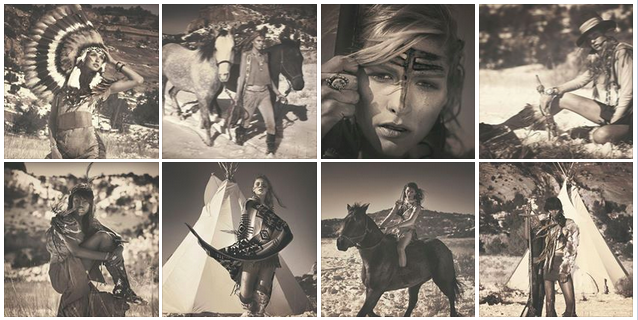 As pictured above, the photos feature non-Native women posing in elaborate feather headdresses and face paint.

Should fashion’s cultural appropriation be accepted?

It is often the case that someone will knowingly or not produce something that may be a homage to another’s culture. The practice may originate from someone making use of designs and traditions s/he is familiar with from his/her own heritage or traditions. But somewhere along the way a line is crossed into offensive territory.  A group may perceive the use of its culture as taking advantage and/or offensive.

If someone’s feelings get hurt, a designer may issue an apology trying to explain away any insensitivity.  In March 2012, Jezebel covered times when cultural appropriation is clearly offensive.

The law should address harmful exploitation and intellectual property law seems to be the way to address cultural appropriation.

To disallow cultural appropriation may be like claiming culture is owned by someone. And that taking part in the cultural appearances and practices is exclusively held by those with a birthright. In a world that is such a melting pot, giving exclusivity to certain parts of culture may be as bad as instituting a brown paper bag test.

Still, I think there should be some legal ramifications. And there are. Some tribes have taken advantage of trademark law. For example, the Navajo Nation — that’s why they were able to send Urban Outfitters a cease-and-desist letter.

When Cheap Jewelry is Just a Colorful Carcinogen

Should companies have to save or trash scraps?