According to the complaint, as early as 2010, the infringers sold imitation Birkins to many stores. Charming Charlie, a Texas based online retailer purchased more than 1600 units. JustFab was another customer.

“Defendants’ Accused Handbags are made from vinyl, not leather, and sell at wholesale prices of between $15.00 and $20.00. They are unquestionably inferior in quality, workmanship and durability to the famous Hermès Birkin Bag.” 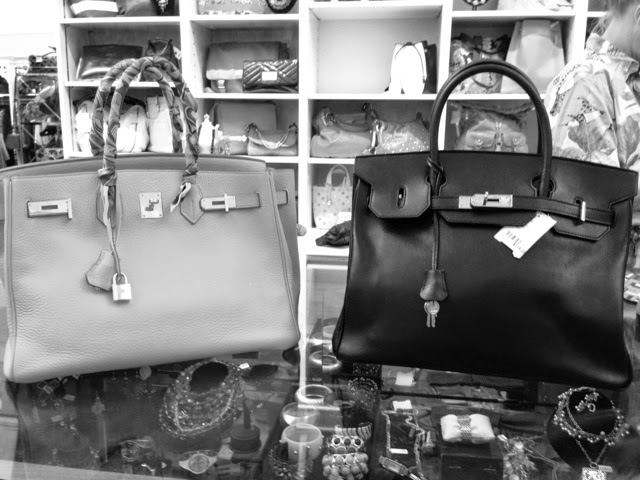 Here is a photo I took of my real Hermès Birkin next to a knockoff at a consignment store. I went in there to consign some things and I could not run away quick enough when they confidently pulled out their infringing bag in hopes of getting my business. Hashtag moment: #FightFakes

I understand that some people think the price of a Birkin is prohibitive and to protect the design is just upholding a status symbol. But Hermès Birkins are protected via its Hermès branding and through its U.S.P.T.O. filed Birkin bag design trademark.

Would you but an imitation Birkin?

“The mark consists of the configuration of a handbag, having rectangular sides a rectangular bottom, and a dimpled triangular profile. The top of the bag consists of a rectangular flap having three protruding lobes, between which are two keyhole-shaped openings that surround the base of the handles. Over the flap is a horizontal rectangular strap having an opening to receive a padlock eye. A lock in the shape of a padlock forms the clasp for the bag at the center of the strap. The broken lines in the drawing represent the location of the handles and are not part of the mark.”

P.S. You might enjoy these other Hermès related fashion law posts