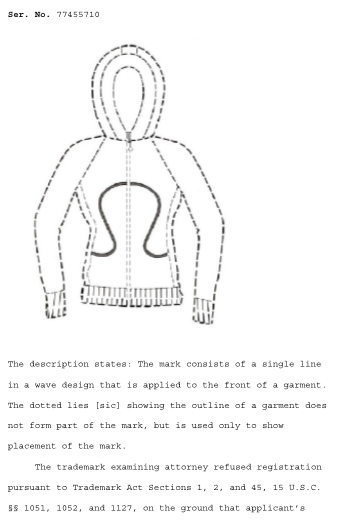 In April 23, 2008, Lululemon sought USPTO registration of the wave design it uses for its clothing, most prominently on its hooded sweatshirts and jackets.

In the present case, the TTAB’s examining attorney’s main concern initially seemed to be with the size of the design in the application. In response, Lululemon submitted evidence of third-party use of marks displayed in large size. Lululemon used these marks as evidence that consumers would perceive such a design as not merely ornamental.

Do you think the Lululemon wave design deserves protection?

The court here ultimately found that Lululemon’s wave design is rather simple and resembles piping. The court reasoned that the Lululemon wave design is likely to be perceived merely as ornamental by the public.

What fashion businesses should learn from Lululemon’s TTAB decision

In particular, the TTAB frowns upon accepting marks that can be ornamental. So, even though the size of a mark can be large, specimens submitted for consideration ought not have the marks displayed in a way that would be deemed as an overall design element.

To appear more like a trademark, the logo should be affixed onto more traditional areas. This use can help prevent the confusion of the logo being ornamental.

An area recognized as acceptable for logo use is on a hidden label (easily paired with the article of clothing’s composition). A hang-tag affixed to clothing is also a traditionally good logo area.

Be careful of your reasoning behind a trademark choice. For example, although the Court of Appeals ultimately reversed the District Court’s finding of functionality of the red lacquered soles, the District Court noted that “Christian Louboutin himself has acknowledged significant, nontrademark functions for choosing red for his outsoles.” The court was referencing Louboutin’s  description and reasoning of his red sole choice. In court Louboutin explained that the red of his soles gave off engaging, flirtatious, memorable, and sexy vibes. He was crazily handing YSL and the court an argument for finding his trademark to have aesthetic functionality.