Hells Angels, a large motorcycle club listed by the U.S. Department of Justice as an OMG (outlaw motorcycle gang), is suing Wildfox for copyright infringement because of its shirt. 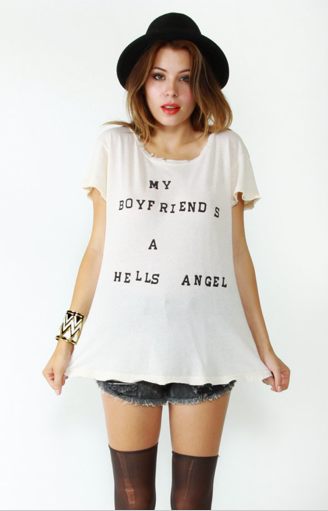 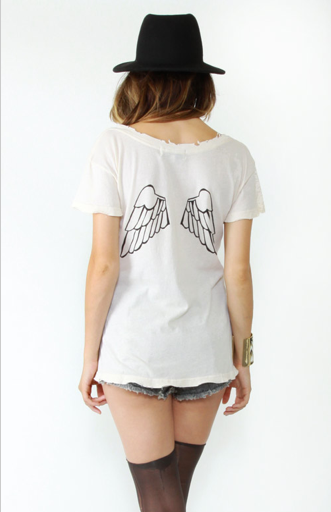 Would you wear this shirt?

Wildfox should settle instead of going to court because 1) who wants to take on the Hells Angels? and 2) Wildfox would waste a lot of money trying to defend itself rather than just removing the shirt from its stores.
BUT it would be awesome to see this fashion law infringement case play out in court. Thus I think Wildfox should not give into a settlement if it can (literally) afford to take the case to court. Wildfox should instead find a fashion lawyer who can help the brand successfully claim an exception to copyright infringement. The Copyright Act allows fair use as a common law defense, which could work here.

Fair Use is determined by a 4 Factor Test:

Fair use is an affirmative defense, so the burden of proof falls on Wildfox here. Given the right argument, a court can find that the use of “Hells Angels” on the pictured t-shirt constitutes fair use.

Last year, in its case against Alexander McQueen merchandise, Hells Angels also went after retailers selling the merchandise. At issue in that Hells Angels complaint was McQueen’s Hells Angels’ jacquard winged death dress, a knuckle-duster ring, a scarf, and a handbag. Saks Fifth Avenue and Zappos.com were included in the lawsuit. The case settled. McQueen agreed to remove the merchandise and recall and destroy merchandise sold.

The products were from one of Lee McQueen’s final collections. And products Lee McQueen later was found dead. It was believed that he hung himself. Although the police did not find the death suspicious, they did not definitively call it a suicide. The death occurred in London. Hells Angels can travel to London. But I am not saying the Hells Angels caused the death. No seriously, Lee McQueen was going through hard times having just suffered the loss of his mom and a great friend. But if Wildfox CEO has a mysterious death after this Hells Angels infringement case…

Show up perfectly polished for interviews