Are Your Instagram Photos Being Sold by Someone Else

Are your Instagram photos being sold by someone else? 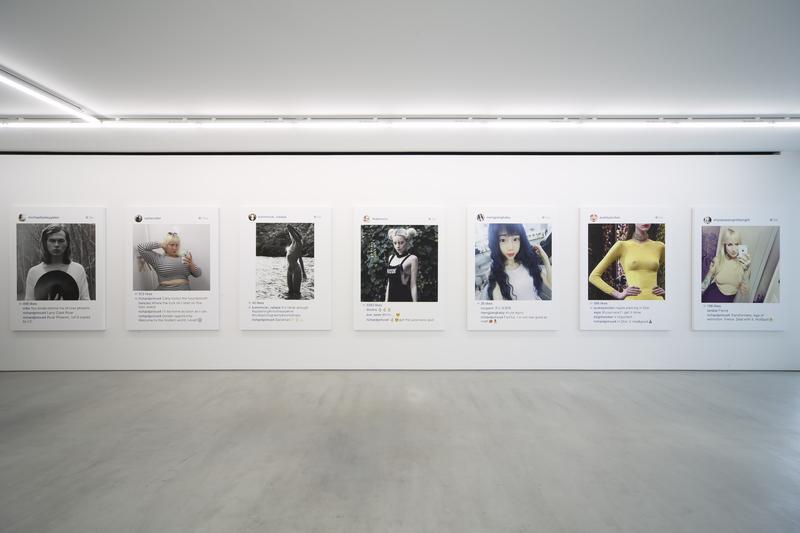 Earlier today, I tweeted a link to an article that prompted me to ask this question. You  already know that “private” or not, you should not post anything on your social media accounts that you would not want your current or potential employer to see.

Must you now worry about only posting something you would not mind displayed in a public space?

Well, an American painter slash photographer who according to his short bio on Wikipedia “began copying other photographer’s work in 1975,” has appropriated the Instagram posts of others. And displayed them in large sizes at a gallery.

It is difficult for me to pinpoint whether this artist, Richard Prince, is one of the least or most clever artists around.

Since last year, Prince has used photos from his follow feed for his own works. These works are simply large prints of his Instagram screenshots. With redacted phone timestamp and battery percentage, of course.

This “New Portraits” collection is available on his website (richardprince.com).

As I previously posted, in Is making art using someone else’s IP legal?, there is a test to apply to check whether someone may legally use the intellectual property of another.

Commercial use of the new work is a consideration in the four factor fair use test. Last year, when Prince first (privately) debuted his Instagram exhibit, the pieces were not for sale.

This year one of his prints already sold during a VIP preview for $90,000 USD.

So, although you own the copyright to a photograph you have taken, someone else may re-photograph your picture and legally get away with it.

People in the Instagram community own their photos, period. On the platform, if someone feels that their copyright has been violated, they can report it to us and we will take appropriate action. Off the platform, content owners can enforce their legal rights.

However, Prince has been making tons of money retaking pictures of popular photos for a few decades already. And yes, some people have taken him on legally. But no, those people did not succeed. Apparently his art has been deemed transformative enough.

P.S.
Artsy.net, a website with a mission to make art accessible to anyone with an internet connection, has a page about Richard Prince and his works.

Andele Lara is the 22 year old Bostonian whose RIH-markable RIH-semblance has been garnering her attention since she was 15.

This Rihanna lookalike is even paid by companies to endorse their products. Right of Publicity and unfair competition claims may arise when someone makes money off of someone else’s likeness.

Is it unfair for brands to hire lookalikes as sponsors instead of the celebrities whose likeness the lookalike reflects?

END_OF_DOCUMENT_TOKEN_TO_BE_REPLACED

This exhibit features 50 artists whose modern art distort idealistic childhood images. The pieces in this collection are deliberately shocking. Scrolling through photos of this art, you may notice that the works of art make use of existing trademarks and copyrights that the mark holder may not authorize.

Is it acceptable for someone to make money using the intellectual property of others?

END_OF_DOCUMENT_TOKEN_TO_BE_REPLACED

By now most of us have heard about the Tupac Shakur hologram performance at Coachella. But I have yet to see anyone discuss the fashion law related intellectual property implications that such holograms bring up!

When I first heard of Tupac’s hologram I remembered that he is currently a ‘Draw Something’ app art prompt. This got me wondering who is promoting Tupac so much. As my conspiracy theories about Tupac being alive wore off, I refocused and started wondering who is profiting from Tupac’s image. Being too lazy/uninterested to even google this I figure Dr. Dre and Snoop Dogg are the ones who mainly profit.

While news outlets and blogs have covered the technology behind the hologram, the sudden rise in Tupac’s album sales, and the possibility of taking him on tour, I was most concerned with what Tupac was wearing.

Trademarks* and Copyrights**
Tupac’s hologram wore his album cover’s look: belted baggy jeans and what I assume are Timberland boots.

What are some trademark implications of holograms?

Holograms can easily bring up new legal ground for courts.

I imagine it could depend on how the brand feels about the use. Let’s say a designer does not want to have his/her trademark on a hologram. What should be the determining factor? If the person wore the clothes while alive, does that make the trademark fair game? If the physical garments are purchased in material form, should they be allowed to be reflected in holograms? Or if a brand wants to be promoted in holograms, who should decide whether it is right? Is this an ethical question?

Should holograms only ‘wear’ things worn by the person who the hologram is made of?
Another trademark consideration here could be whether IP extension would exist if artists were introduced to the public in hologram form (a la Gorillaz); in such a case, the artist could be argued to be a trademark of the record label. In such a case protection would always be viable. Then artists would be  contracted out through IP licensing agreements or moved to new owners through a transfer of IP rights.

In terms of right to publicity, I think it is fascinating that celebrities could potentially create contracts about what they will be wearing or how they will displayed post-death. Estate’s can already cash in by licensing IP or getting royalty payments, I don’t think a hologram should be treated differently.

Do you think celebrities should be able to contract with designers over what the celebrity will wear after death as a hologram?

♥ Thanks for reading and supporting my blog! ♥
*Trademarks are distinctive source identifiers, words, logos, slogans, or a combo thereof, used in connection with goods or services.
**Copyright protection subsists in original works of authorship fixed in a tangible medium of expression.
***Right of publicity confers property-type interest to protect an individual’s marketable image or persona.